While pancreatic cancer survival rates have been improving from decade to decade, the disease is still considered largely incurable.

According to the American Cancer Society, for all stages of pancreatic cancer combined, the one-year relative survival rate is 20%, and the five-year rate is 4%. These low survival rates are attributable to the fact that fewer than 10% of patients’ tumors are confined to the pancreas at the time of diagnosis; in most cases, the malignancy has already progressed to the point where surgical removal is impossible.

In those cases where resection can be performed, the average survival rate is 18 to 20 months. The overall five-year survival rate is about 10%, although this can rise as high as 20% to 25% if the tumor is removed completely and when cancer has not spread to lymph nodes.

Tumor size does appear to impact survival rates. The larger the tumor, the less likely it is to be cured by resection. However, even large tumors may be removed and a number of patients with tumors greater than 4-5 cm appear to have been cured by surgery.

There is increasing evidence that the best pancreatic cancer outcomes are achieved at major medical centers with extensive experience.

In patients where a cure is not possible, progression of the disease may be accompanied by progressive weakness, weight loss, and pain. Effective techniques for pain management are widely available today and used by physicians experienced in the care of pancreatic cancer patients. The techniques include nerve blocks and various drugs that can be taken by mouth or injection. There are also a variety of effective techniques available to treat bile duct obstruction which may produce jaundice and stomach obstruction caused by growth of the tumor. Both surgical and non-surgical techniques may be effective.

At present, pancreatic cancer is treated either surgically, through radiation, chemotherapy, or a combination of these techniques.

Surgery, which currently offers the greatest potential for prolonged survival, is generally only performed if the malignancy has not spread beyond the pancreas. In cases where tumors have been deemed resectable (capable of being surgically removed) the standard operation is the Whipple pancreaticoduodenectomy. This procedure involves partial removal of the stomach, complete removal of the gallbladder, a bile duct, head of the pancreas, portions of the small intestine, and regional lymph nodes. In some instances, the entire pancreas must be removed.

Due to concern that the standard Whipple was associated with excessive weight loss and nutritional problems, many surgeons use a modified version of the procedure in which the stomach is preserved. It”s believed this approach minimizes nutritional problems and is often recommended for those patients with smaller, less extensive tumors.

In some instances, tumors are surgically removed, even though the patient is considered non-curable. In these cases, the operation is designed to reduce discomfort associated with the disease.

When tumors aren”t resectable, surgical intervention may still occur. This would include operating to relieve an intestinal blockage or to perform nerve blocks for pain.

If the tumor is large, can it still be removed?

Small pancreatic tumors (less than 2 cm diameter) are more likely to be resectable than larger ones. Nevertheless, the majority of pancreatic cancers located in the head of the gland are larger than that by the time the diagnosis is made and an operation is performed.

At the University of Erlangen in Germany, of all resections of tumors in the head of the gland:

Thus whiles size is certainly a significant factor in deciding upon an operation it is not the only factor to consider.

What are the findings at the time of operation that make you decide against resection?

In the absence of distant metastases (e.g., peritoneum, serosal surfaces of other organs, lymph nodes outside the usual limits of the resection, liver), resectability depends on whether the tumor has invaded major vascular structures. I usually will not resect if the tumor has invaded the superior mesenteric or portal vein, the superior mesenteric artery or the hepatic artery.

Occasionally lateral or posterior involvement of the vein only becomes apparent after the neck of the pancreas has been transected during the Whipple operation. There is evidence that venous resections in those circumstances are associated with a similar survival as seen in patients who undergo resection when the vessels are not involved. Nevertheless, we view this as a palliative resection, and recommend adjuvant treatment later.

Is advanced age a contraindication to operation?

The morbidity and mortality rates for these operations in selected patients over 80 do not vary significantly from published results for younger patients.

Each patient must be assessed individually, and an evaluation made of the associated risks due to coexistent cardiovascular, pulmonary, and renal disease. Many of our patients who have undergone Whipple resection are over the age of 80; some patients under age 65 have been unacceptable operative risks. The overall operative mortality rate for pancreatic resection in appropriately selected patients is less than 2%.

Should the tumor be removed if cure is not possible?

For patients whose tumors cannot be completely removed surgically, treatment generally focuses on the prevention and/or management of symptoms through radiation and/or chemotherapy.

Radiation therapy is most often used to relieve painful disease sites, while chemotherapy is prescribed to reduce the rate of tumor growth and thus prolong survival. In some instances, radiation and chemotherapy are utilized together.

Additionally, in a new approach developed by City of Hope Cancer Center in Duarte, Calif., radiation, chemotherapy and surgery are combined. The approach consists of 24-hour treatment with the chemotherapeutic agent gemcitabine, followed by surgical removal of the tumor, and radiation therapy administered locally during the operation. Post-operative treatment includes gemcitabine and external radiation.

What is metastatic pancreas cancer?

What is the cause of Pancreatic Cancer?

When is Surgery possible?

Generally if the cancer is localized, surgical treatment, via resection or removal of the tumor, can be pursued. This means that the cancer has not spread to any blood vessels, distant lymph nodes or other organs, such as the liver or lung. These characteristics are determined through various diagnostic techniques.

Questions to Ask the Doctor 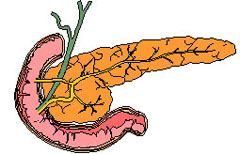 This relationship is shown in the picture of a pancreatic islet where islet cells are secreting their hormones into nearby blood vessels.  Remember, the purpose of endocrine cells is to make hormones which are secreted into the blood stream where they gain access to other cells very far away with the goal of making those cells respond in a specific fashion.

Tumours can develop in the Pancreatic Endocine cells and they may produce symptoms because of their over-production of hormones.

MEN 1 is a rare condition. On average, fewer than 1 person in every 20,000 will carry the gene for MEN 1. MEN 1 is passed down in families from one generation to the next.  MEN 1 can be inherited by a child if one of their parents has MEN 1. Males and females are equally likely to inherit the MEN 1 gene from an affected parent. MEN 1 is known to occur in all major racial groups.

People who inherit the gene for MEN 1 are predisposed to developing an overactivity in hormone production from the parathyroid glands, pituitary gland and pancreas (thetas why physicians will measure hormones in the blood to check for overproduction of each specific hormone). Increased hormone production is usually associated with enlargement of these glands. Endocrine gland enlargement and hormone overproduction does not usually occur in all areas of an endocrine gland at the same point in time. Some parts of overactive endocrine glands grow more rapidly than others, and produce more hormone than other parts of the same gland. The parts of an endocrine gland which grow most rapidly become “lumpy”. These lumps are usually benign. Benign lumps in endocrine glands are known as adenomas.

The surgey for Pancreatic Endocrine Tumours is often complex and requires careful preoperative investigations which are often difficult to interpret. Sometimes only a small amount of tissue needs to be removed (Insulinoma) and sometimes more of the pancreas needs to be resected. In some instances surgery is not indicated.

Pancreatic Endocrine Hormones and Their Purpose