There are a number of situations in which the spleen needs to be removed electively. The commonest situation is ITP, a blood disorer of platelets. Other indications include heamoltic anaemia and splenic cysts.

Laparoscopic splenectomy is the surgical removal of the spleen. It differs from the traditional ”open” technique in that the procedure is performed through small incisions. This usually allows a much faster recovery and is significantly less painful.

How is Laparoscopic Splenectomy Done? 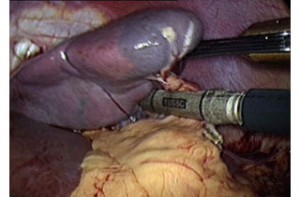 Laparoscopic splenectomy is a surgical technique used to remove the spleen without making a large incision. You will be given general anesthesia. After you are asleep the anesthetist will probably insert a temporary tube into your stomach to empty it. This will help to decompress the stomach and prevent post-operative nausea. A catheter will be inserted into your bladder to drain the urine while you are asleep. Surgery will be done with you turned onto your right side.

Several small incisions are made into the abdomen. One is used for the laparoscope which is attached to a camera that sends images to a video monitor. The other incisions are used to hold or manipulate tissue in the abdomen. Carbon dioxide gas is insufflated into the abdominal cavity to allow room to work and to allow the surgeons to see. Parts of the spleen are freed from surrounding tissue. 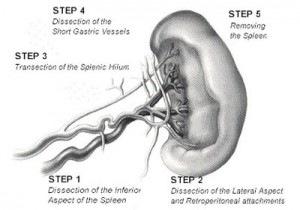 Blood vessels to the stomach and spleen are visualized, tied off or clipped with metal clips and divided. Once the spleen is dissected free of its attachments in the abdominal cavity, it is placed in a special surgical plastic bag and removed through one of the small abdominal incisions. If the spleen is too large to be removed in one piece, it will be broken up in the bag and removed as smaller pieces.

At the end of the surgery, carbon dioxide gas is removed. The small incisions are closed with suture, the skin is cleaned and the incisions are covered with a small dressing.

Any patient who undergoes laparoscopic spleen surgery may need to be converted to the open surgery. The risk of this varies significantly depending on the size of the spleen and a variety of patient factors. (Previous surgery, medical condition, weight)  Since splenectomy is performed for numerous conditions, the likelihood of splenectomy improving or curing the condition varies significantly depending on the condition being treated 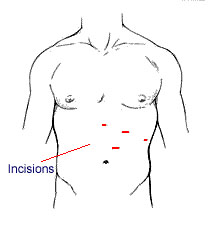 Risks of both open and laparoscopic splenectomy include:

Overwhelming Post Splenectomy Sepsis (OPSS) – infection that can occur even years after splenectomy. Occurs in less than 1% of cases. This is the reason for the preoperative vacinations, to try to reduce the risk of this happening. You need to be aware that it is important that you contact your GP if an infection seems unusual in anyway and remind them that you have no spleen. They will know what to do.

You may need to take precautions if the platelet count rises significantly above normal as is very often the case after a splenectomy even for ITP. This will involve keeping your ”TED” stockings on for a few weeks after discharge and sometimes taking Asprin for a month or 2. You should discuss this with the doctor before you leave hospital.