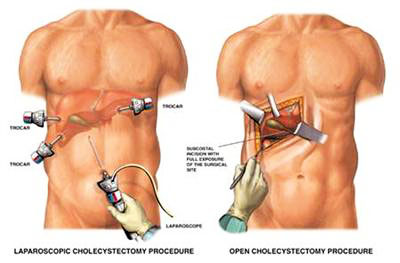 The procedure is performed in the operating room while the patient is under a general (complete) anaesthetic. Four small 5-10 mm incisions are used, one at the umbilicus (belly button), through which the laparoscope is inserted into the abdomen.  Three punctures along  under the ribs are used for placement of the instruments for removing the gallbladder and an additional tiny wound may be made for taking x-rays if necessary.The laparoscope is a long, narrow instrument consisting of a lighted tube with magnifying lenses – to serve as a surgical viewing scope.  It is attached to a small television camera in order for the surgeons and all assistants to view the gallbladder on an external video monitor during the procedure.

Either plastic or metallic surgical clips are placed on the duct and artery leading to the gallbladder, in order to secure the structures against leakage or bleeding.  Then an instrument heated by electric current is used to cut the attachment of the gallbladder from the liver bed.  The gallbladder is then removed from the abdominal cavity through the incision in the umbilicus.  This incision may be enlarged slightly if the gallstones are large. The time required to complete the procedure varies from 25 minutes  to 3 hours, depending on the state of the gallbladder, the amount of inflammation or swelling present and the local anatomy.

Why is the Procedure Performed?

Any cholecystectomy is performed when your doctor concludes that the gallbladder is diseased, not functioning properly and/or contains gallstones.  The gallbladder is removed to avoid further complications such as bile duct obstruction, which can affect the liver.

The laparoscopic method of cholecystectomy is performed as a way to avoid, if possible, the major abdominal incision required for other methods of gallbladder removal, as well as to have minimal bleeding during the operation process.  The major abdominal incision in regular gallbladder removal procedures is the principle cause of the extended recovery period required.

Converting to Open Procedure during the Laparoscopic Cholecystectomy

In some cases, circumstances may arise during the procedure which may cause the surgeon to abandon the laparoscopic technique in favour of an ‚¬Å“open‚¬ cholecystectomy procedure performed through a standard incision.  Some of the circumstances that may require conversion to open procedure include excessive bleeding, intense inflammation in the gallbladder or stones in the bile duct.  The same anaesthetic is used, but the surgeons must make another type of incision and alter their methods of gallbladder removal.

The advantages to the patient derived from removing the gall bladder by the laparoscopic method, in contrast to other removal procedures are:

Risk involved in the laparoscopic procedure

The major risks associated with this procedure are similar to those with open cholecystectomy.  These are infrequent or rare.  The most common risks include:

Other methods for treatment of  gall stones also exist.  These methods include removal, dissolving or breaking up of the gall stones without gall bladder removal using:

Unfortunately these treatments are not applicable to the vast majority of patients and are rarely practiced in Australia as they seldom work.

If only the gallstones and not the gallbladder is  removed  there is a high probability that stones will reform in the gallbladder and symptoms will continue or recur. (It is rare for gallstones to form again in the bile duct after cholecystectomy).

For most patients there will be no long term side effects of having a diseased gallbladder removed. Once the wound pain has settled a very small number of patients may have more frequent bowel actions and some gastro-oesophageal reflux symptoms.