This operation is the most effective weight-loss operation.  It is essentially a restrictive operation, where the stomach is partitioned into a small pouch.  This pouch then empties into small intestine which is joined onto it (a so-called roux limb, hence the name roux-en-y gastric bypass).  As well as reducing the amount of food eaten, the passage of undigested food into the small intestine exerts powerful hormonal influences which create a feeling of satiety.  The amount of intestine bypassed is not enough to cause any nutritional problems from malabsorption, but iron and vitamin B12 supplementation may have to be taken indefinitely (the stomach is responsible for aiding their absorption). 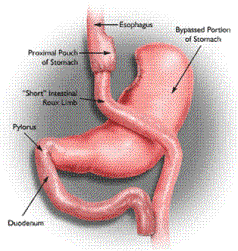 Weight loss is usually 70% of the excess body weight, and it is uncommon for people not to lose weight after gastric bypass.  It is also the most effective operation in terms of curing co-morbidities, such as type 2 diabetes.

There are significant risks associated with the operation (leakage of intestinal contents, ulceration or narrowing of the join between the stomach and intestine).  The operation is usually performed laparoscopically, but it is not uncommonly performed through an open incision.

Once the joins have healed and the patient leaves hospital there is an ongoing risk of forming internal hernias which can cause bowel obstruction (3-5% lifelong).  Blood tests should be performed at least annually to check for iron and vitamin B12 levels as well as other vitamins and minerals.