Gastro-Oesophageal Reflux is a condition which affects most people only occasionally. A significant number of people however have an excessive amount of reflux which can cause troublesome symptoms and occasionally complications. 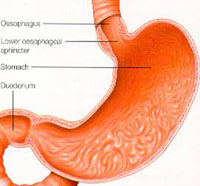 The lower oesophagus (or gullet) has a muscular sphincter (or valve) which together with other anatomical structures prevents the reflux of gastric acid (and other gastric contents)  out of the stomach and  up into the oesophagus.

When this mechanism fails and there is excessive acid in the lower oesophagus then inflammation and ultimately ulceration can develop. This can also give rise to severe scarring and sometimes abnormal cells that can rarely go on to form cancer.

Nowadays it is possible to prevent oesophageal damage with a number of medications and it is only occasionally, when the reflux is severe or when the medication is contra-indicated, that surgery becomes necessary.

The operation is called an Anti-Reflux Procedure. There are a number of different operations which can be performed and your surgeon will tell you about the procedure most appropriate for your problem.

Most of these operations involve producing an area in the lower oesophagus which can act like the sphincter or valve to prevent reflux. Unfortunately these artificial valves are never as sophisticated as the natural valve and there are invariably at least some long term side effects of the surgery which are minor for most people.

Many of these symptoms settle down to a greater or lesser degree with time but most patients get used to them quickly and recognise that they are a small price to pay for relief of the original reflux symptoms.

The procedure can be performed through a long cut in the upper abdomen (open operation) but usually it is Keyhole Surgery. This is the same operation performed with a laparoscope and may take a little longer to perform but is less painful in the early days after surgery and may help patients get back to work  sooner. The laparoscopic operation is not possible or appropriate in some patients and the longer term results are less well established than for the open operation.

Occasionally a Nasogastric tube (through your nose into the stomach) may be in place for at least some time after the operation and you may require fluids into the veins initially. You will be commenced on soft food within  a few days and should expect some swallowing difficulty at first and should avoid some foods initially which may get stuck in the oesophagus, such as steak. chicken pieces and bread.

Some patients may still need to take medication to achieve the level of reflux control they desire.

If you have any other questions please ask you surgeon. Anti-reflux surgery is often complex and you need to feel that you understand the procedure and its likely outcome before you embark upon the surgery as this will ensure that you get the best possible result from the operation.