The gastric band has become the most commonly performed operation for weight loss in Australia.  It is a restrictive operation which is performed by keyhole (laparoscopic) surgery.  A silicone band is placed around the very top of the stomach.  This creates a tiny gastric pouch above the band.  This reduces the amount of food that can be eaten and the speed at which it can be consumed.

It works best with solid food, which stretches the wall 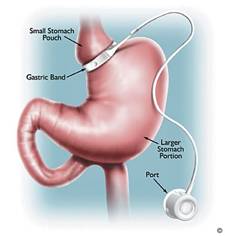 of the pouch, triggering a feeling of satiety. With time, the opening between the pouch and the rest of the stomach may enlarge, leading to less feeling of restriction.

The advantage of the band over VBG is that the size of this opening may be adjusted.  This is done by injecting fluid into the access port which is secured onto the muscle of the abdominal wall, under the skin and fat.

This procedure usually needs to be done three or four times in the first year after surgery, and roughly annually after that.  The lap-band is the safest weight-loss operation and completely reversible, meaning that the band can be removed and the stomach returns to its normal state.  However, of all the bariatric (obesity) operations, it is the least effective in terms of amount of weight lost and requires the greatest degree of follow-up.

Once a lap-band is inserted, a patient must visit the dietician and surgeon regularly for the rest of their life, or until the band is removed.  Current evidence suggests that about 10% of people require further surgery down the track.  Initially this is most commonly for problems relating to the port such as infection or migration.

Later on (3 to 5 years) problems with the band such as slippage of the stomach under the band (leading to reflux and vomiting) or erosion of the band into the stomach (leading to loss of restriction and late port infection), may require further keyhole surgery to remove the band.  Problems with the band do not necessarily prevent any further weight-loss surgery from being performed later on, but they do make subsequent operations more risky.

Weight loss with the lap band can be expected to be 50-55% of the excess body weight (the weight above ideal weight – BMI of 25).  This occurs gradually over 3 years.  In 25% of people, for reasons that are poorly understood, the lap-band does not give adequate weight loss.  A smaller proportion of people do not tolerate having the band in place; either because of the feeling of restriction, or because of food getting stuck.  In these cases the band may need to be removed.

In order for the lap-band to work, strict dietary instructions must be adhered to.  The operation itself (which takes about an hour) and the initial hospitalisation (usually about 2-4 days) is a very small part of the overall process.  For the first two weeks after surgery a liquid only diet must be consumed, while the swelling around the band settles down.  The following two weeks progress to a mushy pureed diet.  After that, the lap-band diet is started.  The quantity of food is greatly reduced, so regular visits to the dietician are required to ensure that sufficient nutrients are taken in.  Meal size is roughly a cupful, or one entree.  This must be eaten slowly and chewed well, or food is liable to get stuck leading to pain and vomiting.  The band only works with solid food, so drinking must be either before or after the meal, not with the meal.  About 2/3 of people find that they cannot eat certain foods because they get stuck.  This is most common with red meat and chicken.  Fizzy drinks must be avoided as they can cause pain from stretching of the pouch.  Alcohol is discouraged because of its high caloric value.

Band adjustments start at six weeks after the operation.  They are done with a needle by the surgeon in the rooms.  Sometimes the port cannot be accessed easily, and the adjustments need to be done with X-ray guidance.  The procedure is about as painful as giving blood, and usually takes a minute.  The timing of the adjustments is determined by the feeling of restriction that the band is giving, and by the progression of weight loss.  Generally speaking, as the feeling of restriction lessens, the volume eaten increases and the weight loss tapers; this indicates to us that it is time for a band fill.  The number of fills required varies with the individual, but is usually four in the first year, and one or two the year after that.  Eventually, fills are not required, as weight loss goals have been reached.  Overfilling the band can damage the band, but more significantly can cause vomiting which increases the likelihood of the band slipping.