This is a newer form of weight-loss surgery.  It is also called vertical gastrectomy and tube gastrectomy.  It is a restrictive operation and is performed by keyhole (laparoscopic) surgery.  About three-quarters of the stomach is removed and the remaining stomach has a volume of less than 100 ml.  This is a non-reversible procedure. 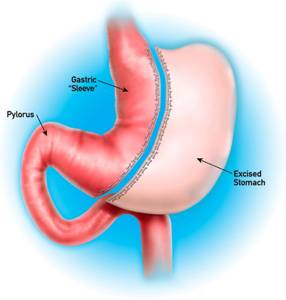 There are several benefits to this approach:

There are several significant concerns:

Historically, the sleeve gastrectomy was developed as the first part of two-stage surgery.  The sleeve gastrectomy would be performed to allow initial weight-loss, which would then make a second operation (such as duodenal switch or gastric bypass) much easier to perform.  The excellent weight-loss results led to it being adopted as a stand-alone procedure, however, the option of having a second operation should weight-loss be inadequate or should there be long-terms problems with weight regain remains.

The preparation for surgery is more or less the same as for the lap-band.  It involves attending a seminar, discussion with the dietician, psychologist, nurse and surgeon, and a two-week course of Optifast.  The surgery is performed through five keyhole incisions.  The surgery takes between one and two hours.  A clear liquid diet is started gradually from the first day after the operation.  Antacid medication is also started and usually continued for four weeks.  If abdominal drains are used, they may be removed after two to three days.  Total hospital stay is between three and five days.  A fluid diet is continued for two weeks.  This progresses to a pureed diet for two weeks and then a soft diet for two weeks, then a normal diet is commenced.

After the initial convalescence, there is no need for intensive follow-up with the surgeon, however the dietician may be useful for ongoing advice and to monitor nutritional intake.